To Cook or Not to Cook?~That Is the Midlife Question 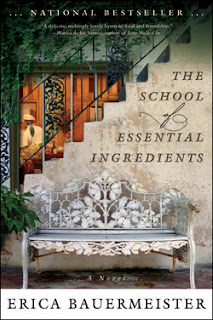 Last week, inspired by the reading (re-reading for the pure pleasure of absorbing her mouthwatering writing) of Erica Bauemeister’s marvelous novel of food and love, The School of Essential Ingredients, I did something I hadn’t done in a long time—I cooked. I didn’t just throw something together to satisfy a generic appetite with generic calories, but—taking in the aroma of oregano, the silky feel of flour on my fingertips , the sound of whisk against china as I whipped eggs to a froth—I mindfully, happily, actually cooked.


Within a single few days, I simmered white chili and stir-fried beef with bok choy. For brunch, I made my daughter-in-law’s crème brulee French toast casserole, a puff of souffléd challa over a foundation of caramelized syrup. Exquisite, my guests said. I brewed minestrone. Made butterscotch pudding from scratch. The kitchen gods (sculpted in stone and enthroned atop my fridge) smiled down on me. It had been a while.
I used to cook and be cooked for all the time. Ask any woman—having a man cook for you is a delicious turn-on. I have been wooed with soup, seduced by a stew, soothed with risotto. And I’ve cooked to express all kinds of love: baked a child’s birthday cake, simmered a family pot of chicken soup for cold nights. Also, for husbands and other close friends, made a simple sauce of fresh tomatoes, garlic and basil that spoke of summer in winter and asked for a warm embrace in a warm bed. And in summer, fixed crab cakes, seasoned with Old Bay—a sexy blend of spices. Crab, some say, is an aphrodisiac. Agreed. Cooking at its best is an expression of something higher, more abstract than zucchini. Call it love. Call it art.


Among many of my midlife friends, it’s become a lost art. “I no longer cook,” says a married one. “I heat and I arrange.” She buys ready-to-serve dishes from Wegmans or pre-marinated meats from Trader Joes and saves homemade for when the kids are in from college.  A divorced friend shrugs. “My mother told me that the fastest way to a man’s heart was through his stomach. Wrong. The girlfriend followed a different map and snagged the guy. So cooking leaves a bitter taste in my mouth. ” She dines out often, or scrambles eggs or micros Lean Cuisines. I understand. I’m guilty myself. Still, reading Erica Bauermeister's book made me realize how much we-who-no-longer-cook are missing.
Eight times year I’m reminded of how food and its preparation connect us. Both the gourmet group and a couples book club I belong to have dinner as the evening’s fulcrum. And the spouses cook these dinners together, work side by side, chopping, sautéing, roasting, baking homemade bread. Toba may do the gazpacho and Andy his incomparable salad, but they’re hip-to-hip in the kitchen. Lenne glazes the cornish hens while Hal mashes the potatoes. PJ and Hamp work in tandem. These couples may be past the baby-making stage, but they’re still creating something lovely together, a feast at least, and taking pleasure in the process.


I know of a woman who brags that she hasn’t cooked dinner for her family in decades, except on holidays. Today this social worker has retired to halftime practice and usually dines early, on whatever, and alone. Her husband, a workaholic, logs in around nine having grabbed a slice of pizza at the commuter train station or yogurt from the fridge. Which he eats in solitary silence. How sad, I think. How symptomatic of a marriage gone as stale as a week-old bagel.
Cooking is love in the active sense. For lovers, it’s a dance together. For family, it’s glue made of sugar and butter and cinnamon. For friends it's a gift. Of course I have more half-baked theories. But right now there’s a meatloaf in the oven I need to check. It’s my mother’s recipe, with a sauce of tomatoes, mushrooms, peppers and onions.  It will taste of love and memory, of laughter and lost times. And it won’t need ketchup.

We would love to read your comments on the joys of cooking—or not cooking—at midife. And please share your favorite recipes.  One will win for its author an inscribed copy of my next novel, Happy Any Day Now, coming out this summer.

Hillary's Hair: Why Do We Care?

She’s baaaaack. After the flu and the concussion and the blood clot. After Fox News accused her of malingering to avoid testifying about Benghazi, and the world elected her its most admired woman, trumping even Michelle Obama, Hillary survives. She showed up at the office yesterday, looking healthy and rested. She smiled dazzlingly and her eyes twinkled. She wore a very unstatespersonlike hot pink jacket and— I can feel myself hurtling down the slippery slope here, so stop me before I reach bottom—her hair looked fabulous. Like I care. Really, I swear on Martha Washington’s grave, I don’t. But in the interest of giving the public what it obviously so desperately craves, this entry will consider what is most fascinating about Hillary: her hair. The multi-purpose, wash-and-wear, devil-make-care, flip-and-flare, imprisoned-in-a-rubber-band snare, too short, too long, Hillary hair.


At the party I attended on New Year’s Eve, a man I’d known and respected for years, a major Hillary fan BTW, said, apropos of absolutely nothing, “So what’s with Hillary’s hair?”
A collective gasp whooshed around the living room. At that moment, the ball in Times Square quivered in its perch. Horns fell silent. Ryan Seacrest, believe it or not, fell silent. Mack, a pseudonym I’ll use for our questioner so he won’t be forced to enter the witness protection program, repeated, because those around him seemed too stunned to answer, “I mean, what’s with the hair?” I cleared my throat to tell him what. In spades. But his wife beat me to it. She rolled her eyes, reached over and applied a very expert Three Stooges noogie to his balding pate before proceeding to explain in a barely controlled vibrato, “The woman has flown almost a million miles in the last four years. Do you know what an airplane's re-circulated air does to hair? Turns it to straw.”


I chimed in, “When I shampooed in the hard Los Angeles water last month, I had to use half a bottle of L’Oreal’s Total Repair to untangle my curls. The tap water even in the five star hotels in Sudan (do they have five star hotels in Sudan?) doesn’t approach the quality of camel pee. That’s what the Secretary of State of the foremost (maybe still) western power sluices through her hair.”
“Hey, Mack, you seem to have hit a nerve,” a male voice contributed.

It had come to this. Men commenting on Hillary’s hair. Okay, Rush Limbaugh gagging over an unfortunate upsweep do of Hillary’s and posting a Bride of Frankenstein doctored photo on his website. Rush, I can understand. But normal men?


Women I forgive. Our hair, and other women’s hair, is an obsession of my gender. Not because we don’t possess the intellect for more lofty obsessions, but because we’ve been conditioned (forgive the pun) since childhood to be ruled by our hair. Take me, for example. This is my second post about hair and my blog has only been up since July. I am mortified. I am repentant. I am writing this.
“Why doesn’t anyone talk about  John Boehner’s hair? Looks like a wig to me. And do you remember Tom Delay’s shiny black plastic toupee. Did you ever hear comments about that?” This was called in by a woman on the far side of the room.


From another:“Carl Levin’s comb-over starts an inch above his left ear.” The Democrat senator from Michigan has to be in terror of a high wind. “Does that make the New York Times? What about men and appearance?”
“They say Chris Christie’s fat,” a male voice countered.


“And they, whoever they are besides dietitians, find it endearing. Half grizzly bear, half Teddy and he takes no crap from no quarter. The man swings weight, among other anatomical features, and he’s admired for it.” I sighed. “The Huffington Post ran a slide show of photos spanning the Hillary hair years between college and now. Bangs and no bangs. Headbands. Sexy wavy. Short and sassy. Long and exhausted. She’s probably been through hundreds of hairstyles since Wellesley.” I paused for effect. “Do you really think that’s accidental?”
All heads turned. A conspiracy theory starring Hillary Clinton? Irresistible. Someone muted the televised cacophony from Times Square. “This is a very smart, very shrewd woman,“ I continued. “She’s sending us a message.”


“A message? “ was the chorused question.
“ A message that she’s flexible. She’s adaptable. She embraces change. She welcomes diversity. She’s way beyond superficial concerns. She chooses to sacrifice form for function. She’s willing to put her scalp on the line for these United Sates of America.“ I caught a pre- coup de gras breath.  “Which makes her perfect presidential material. Watch out for 2016.”


The conservatives hanging around the bar groaned in unison and many hands simultaneously reached for the bottle of Gray Goose.
Yet now, just as we have her back, Hillary’s leaving us. In two weeks she’ll be departing the State Department. How she will wear her hair as she ends this chapter in her career is unknown. Maybe she’ll do a Sinead O’Connor. Maybe a perky pageboy, like Mary Tyler Moore's as she edged to the door at WJM-Minneapolis in the final episode. At which point, those who think Hillary was the best secretary of state since John Quincy Adams will no doubt be tearing their own hair. And those who think she’s the devil incarnate will be praying it is her final episode. My fellow Americans, don’t count on it.


In the meantime, in her most recent stepping stone role she will be replaced by John Kerry. John Kerry! Now what’s with that hair?