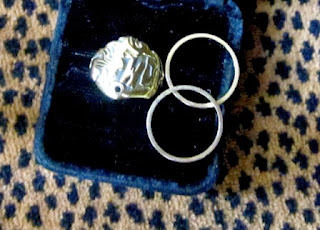 
I have slender fingers, and the two thin bands are slightly big on me but, with the ring measured for a thirteen-year-old boy sliding on last, everything seemed secure. And then a few weeks ago I glanced down at my hand and realized that, although my mom’s two bands were intact, the bar mitzvah ring, last on, was gone.

I swear I turned over every pillow, crawled under every piece of furniture, scoured every room for the lost ring. I checked the car. Traced my steps for the two previous days and made calls. All in vain. So I turned to St. Anthony, “finder of lost things.” Since an Italian friend introduced me to the good saint decades back, he’d always come through for me.

“Hey, Tony,” I prayed in my best Little Italy accent, “Help me, old pal. Don’t fail me now.“ But nanda, rien, gornisht, nothing. I was devastated. It was as if I’d lost the tangible presence of my parents. And after it occurred to me that the ring had probably slid off my finger at my condo building’s trash chute, had gone down with the plastic bags and was buried in some county dump, my heart broke a little more .

Back story over. Fast forward to yesterday morning. A friend is celebrating her birthday next week. Now, all the closets in my apartment are walk-ins, an estrogen-driven dream. The one in the second bedroom has sufficient space, to hold—besides off-season clothing—files of birthday and other greeting cards, gift wrap organized in boxes, and ribbons and tissue paper neatly stored in a large bag. (This gift stuff obsession is also a woman thing. Men do not get it.) It was when I went to that bag to pull some tissue paper for my friend’s present that I saw something glitter at the bottom. And of course, there it was, the bar mitzvah ring. A tiny, shining miracle on an otherwise ordinary October day—as if any day in our short lives can be counted as ordinary.

Have you ever recovered something long after you’d given up hope of finding it? Or maybe you discovered a lost object in an unexpected place. We’ve just made it much easier for you to tell us about it. Just look below my text and you’ll see the comment box. That’s it. You found it! I’d love you to try it out so that everyone can enjoy your lost-and-found stories.

Scroll to the bottom of the page to leave a comment.
Posted by KDD at 10:08 PM